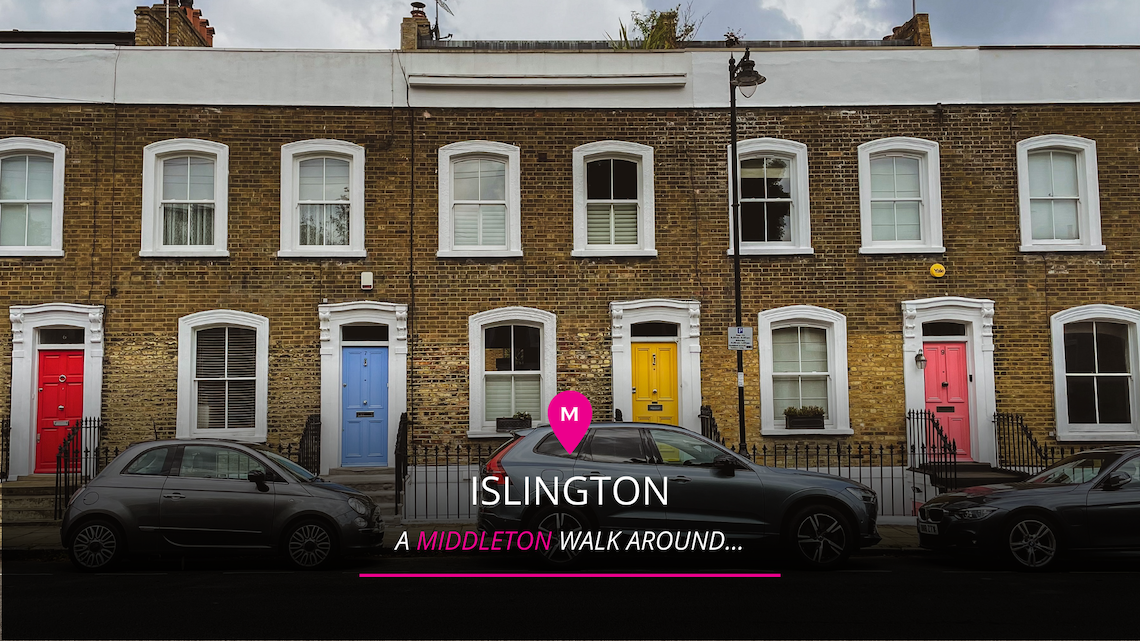 A walk around Islington with Rhianne

Middleton’s Rhianne McIlroy takes a walk around Islington – despite being a well-established neighbourhood, Islington continues to grow in popularity and has been a home-buyer hotspot for 2022. With an abundance of high-end dining and retail, green spaces and easy access into the city, there’s no wonder the post-pandemic ‘race for space’ has influenced property prices in N1. LonRes research notes the annual change in achieved price has approximately increased by 5 in the last year.

Not always as chic, however, following the war, Islington was reputedly crime-ridden until the process of gentrification began in the late 1950s. The flourishing of the Camden Passage antique market led to Upper Street becoming a golden mile of up-market shops and restaurants. The latest Upper Street addition is Islington Square, which has replaced a former Royal Mail sorting office with luxury residential apartments, dining, and top-tier gym, Third Space.

There is no shortage of high-achieving schools in Islington and the nearby areas, Stoke Newington and Highbury. Four of the ten most popular primary schools, including William Tyndal on Upper Street, has been given the Ofsted rating of outstanding. The same can be said for secondary schools, with four of the top ten most highly rated schools in Islington, also achieving outstanding Ofsted status.

The area is particularly popular with domestic buyers, many of which are in the creative space, not surprisingly given its injection of cultural and social hubs.

For example, The Sage Awards London Theatre of the Year in 2018, The Almeida Theatre, is a small venue with a big reputation. It’s known to house popular productions before they make their way to the West End and is located just off Upper Street. The borough earns its place as a London favourite without its rich ‘foodie’ scene – The Duke of Cambridge serving only organic pub grub and Michelin starred 12:51 by James Cochran famous for the gourmet twist on fried chicken. 69 Colebrooke Row, or ’the bar with no name’ is a speakeasy-style bar for experimental cocktails from master mixologist Tony Conigliaro.

Islington is easily broken down into four prime hotspots: Angel, Barnsbury, Canonbury and The De Beauvoir Estate. Each offers a slightly different neighbourhood feel and architectural style but is equally as popular. Those seeking the quintessential London townhouse will be led to Angel, where flat-fronted Georgian homes dominate at price points between £2,000,000 and £7,000,000. If you’re seeking width and a larger garden, then Canonbury and its quiet residential streets are lined with sought-after Victorian villas dating back to 1850. Barnsbury feels very much like a village in the heart of the city with its blend of green spaces, neighbourhood coffee shops and garden squares.